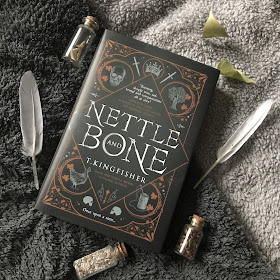 I was sent this proof for free by Titan Books for the purposes of providing an honest review.

Nettle and Bone by T. Kingfisher

After years of seeing her sisters suffer at the hands of an abusive prince, Marra—the shy, convent-raised, third-born daughter—has finally realized that no one is coming to their rescue. No one, except for Marra herself. Seeking help from a powerful gravewitch, Marra is offered the tools to kill a prince—if she can complete three impossible tasks. But, as is the way in tales of princes, witches, and daughters, the impossible is only the beginning. On her quest, Marra is joined by the gravewitch, a reluctant fairy godmother, a strapping former knight, and a chicken possessed by a demon. Together, the five of them intend to be the hand that closes around the throat of the prince and frees Marra's family and their kingdom from its tyrannous ruler at last. From The StoryGraph.


Trigger/Content Warnings: This book features dementia, childbirth, references to miscarriage, references to abortion, reference to death during childbirth, infant death, references to cannibalism, violence against women, domestic violence and abuse, uxoricide, and references to suicide.
I was really intrigued by Nettle and Bone by T. Kingfisher when I first heard of it. The first two lines of the blurb - "This isn't a fairytale where the princess marries a prince. It's one where she kills him." - hooked me right from the start. And it was so bloody good!

Marra is a princess of the Harbour Kingdom, a small and shabby kingdom, but one that has something the Northen and Southern Kingdoms want - the harbour. The Queen of the Harbour Kingdom has married off her daughter to Prince Vorling of the Northern Kingdom, to keep either Northern or Southern Kingdom attacking for the harbour. Marra has lived in a convent since she was 15, at the insistence of Vorling. He's obsessed with making sure that it's his child, his bloodline, that ends up on the Harbour Kingdom's throne, so his family has control of both kingdoms. So Marra is sent away to be kept chaste. But when the truth comes out that her eldest sister Damia, who married Vorling first, was actually killed by him, and that Vorling now hurts the middle sister he's now married, Kania, she is determined to do something about it. She has to kill the prince. There is no other way to save her sister. But she's not a very good princess, and she's barely a nun, and has no idea of what she can do. She seeks out the help of a dust wife, and it's not too long before a ragtag motley crew are making their way North to save Kania.

Nettle and Bone has a lot of fairy tale imagery and symbols; royalty, fairy godmothers, animals with more to them than meets the eye. But while there are glimpses of fairy tales, nods towards them, I really like how Kingfisher took any of our preconceived ideas and turned them on their head. This is not the fairy tales we have come to expect. In fact, it's something a lot closer to original fairy tales. It has a very dark underbelly. Because at it's heart is domestic violence. A prince who wants to control over everything, to whom women are property. His wife wanting to sit vigil over the death of her daughter brings about a terrible fury. Vorling is terrifying. He killed Damia, and he beats Kania to death. Marra can't sit with this knowledge and do nothing. But there's nothing she can really do. Until she hears of a powerful dust-wife, one who might be able to help.

But Nettle and Bone is also surprisingly light. It definitely has a number of very dark and horrifying moments, but it's also really very funny. It's not a simple case of Marra getting the help of the dust-wife and off they go. There ends up being a group of them; Marra, an awful princess and not-quite nun, a powerful dust-wife who only has power over the dead, a warrior from another kingdom, Fenris, whose honour has him seeking death for wrongdoing, Agnes, a fairy godmother with very little power - or so she'll have you believe, a bone dog brought to life by Marra during one of her three impossible tasks for the dust-wife, and a chicken with a demon in her. I absolutely adored the dust-wife - who never gives her name, but who Fenris calls Lady Fox - and Agnes. The dust-wife is grumpy, stern and forthright, and has some brilliant one-liners. Agnes is slightly doddering and sweet, wants to see the good in everyone, and can't stop talking. She's also incredibly funny and very endearing. Seeing both the dust-wife and Agnes bounce off each other is just comedy genius, and I adored them. Plus the chicken with the demon in her and Bonedog both have their own personalities, and bring their own laughs. Honestly, this group is wonderful!

But on paper, Nettle and Bone shouldn't be a book I enjoyed. I have never read a standalone fantasy I have loved until now. I do not get on at all with comedic fantasy, I tend to find the humour really grating, and would rather the author stopped making jokes. And I really do not like high fantasy stories that are stop-start, stop-start, because there's no real flow to them. Nettle and Bone is a wonderfully short (for a high fantasy, at 324 pages), but completely satisfying standalone high fantasy. It's bloody hilarious. And it managed to have flow despite the numerous times they had to stop on their journey, with the incredible friendship in this found family. Honestly, I absolutely adored it!

I really, really loved Nettle and Bone, and will soon be adding T. Kingfisher's other novels to my bookshelves. I'm really so excited to read more of her work. If you want a quick high fantasy that doesn't get bogged down in complex world building, and balances the dark with so much light, Nettle and Bones could be for you.