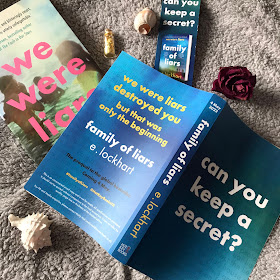 I was sent this proof for free by Hot Key Books for the purposes of providing an honest review.

Family of Liars by E. Lockhart

The thrilling prequel to the TikTok phenomenon and #1 New York Times bestseller We Were Liars takes readers back to the story of another summer, another generation, and the secrets that will haunt them for decades to come.

A windswept private island off the coast of Massachusetts.
A hungry ocean, churning with secrets and sorrow.
A fiery, addicted heiress. An irresistible, unpredictable boy.
A summer of unforgivable betrayal and terrible mistakes.

Welcome back to the Sinclair family.
They were always liars. From Goodreads.

WARNING! I cannot review this book without spoiling We Were Liars. Read no further if you're planning on reading this series and don't want it spoilt for you.


Trigger/Content Warnings: This book features forced cosmetic surgery, drug addiction to medication, implied alcoholism, attempted rape, implied homophobia, infant death, and drowning.
I'd been so looking forward to reading Family of Liars by E. Lockhart since it was first announced. I dragged my heels a bit on reading We Were Liars, but I absolutely adored it, and wasn't going to make the same mistake with it's prequel. And it was so bloody good! Just as twisty and surprising as the first book!

It's summer, 1987. Carrie Sinclair is 17, her sister Penny 16, and her sister Bess 14. As always, the Sinclair family have returned to their island of Beechwood. But this summer is different; it's the first summer without Rosemary. Rosemary was their youngest sister, but she died last summer, drowned, when she was 10. The Sinclair family doesn't talk about their feelings; they move forward, they choose joy, they go back to being normal. But Carrie isn't coping so well. She is grieving, but unable to express her grief, because no-one wants to talk about it, they just want to move on, leave it behind. Live Rosemary behind. But Carrie can't do that. Because it turns out Rosemary isn't gone, she's still at Beechwood, sometimes, waiting for Carrie. But that's not the only thing different about this summer. It's the summer after Carrie's jaw surgery, it's the summer she self-medicates, and it's the summer a group of boys join them. It's a summer of betrayal, and a summer of liars.

This book is so, so good! The story is different, the reason for the story is different, but the Sinclair family is so familiar. I didn't know what to expect with Family of Liars. I thought we'd probably end up with twists we absolutely didn't see, which we do, but not what the story is about. With We Were Liars, it doesn't take long to realise it's the mystery around what happened the summer two years previously; what was the accident Cady was in? And why can't she remember? With Family of Liars, there's no real hint of what this story is about, except for the fact that that it involves a group of boys. And it's the story of the worst thing Carrie has ever done - because Carrie is actually telling this story to the ghost of her dead son Johnny, who has asked her for it.

In 1987, things are different from what we know from We Were Liars. Beechwood is owned by the girls' dad, Harris, and also Harris' brother, Dean. They each have a house, and each year they bring both their families - Dean bringing his daughter Yardley, same age as Carrie, and son Tomkin, who's 11. There is Clairmont, but none of the other houses we know have been built yet. But there's Pevensie, for Dean and his family, and Goose Cottage, for guests. The atmosphere is different. Everyone seems to get on pretty well. While the Sinclair sisters aren't super close, they're quite different from the aunts we know We Were Liars, who were constantly bickering one year over who got what once their father died, to being brought together by the deaths and near deaths of their children. This year, Yardley brings her boyfriend George and two of his friends, Major and Pfeff.

I don't really want to say too much else about it, because it's so much better to find out as you read. You know something is going to happen at some point, because of Carrie's conversation with Johnny at the beginning of the book, but as you're reading along, it's just a summer. Until it's not. There are shocking revelations and incredible twists, one after the other! Honestly, I wasn't sure what Lockhart could do with Family of Liars considering the twists of We Were Liars. How do you beat, or at least equal, that in regards to the shock-factor? But my god, does she manage it! It's bloody incredible; you're still reeling from one thing, only to be hit with another! Lockhart is absolutely the queen of twists and mystery, and will have your jaw on the floor! It's such an emotional rollercoaster! I didn't see any of it coming, and it was just so, so good! And because it was so good, I hope Lockhart doesn't stop. I hope she goes back another generation, to when Harris or Tipper were teenagers. I just want more!

Family of Liars is a bloody fantastic prequel to We Were Liars, and it absolutely will not disappoint! Those who raved about We Were Liars are definitely going to want to pick this one up, just prepare to have your mind blown!

Thank you to Hot Key Books for the proof.