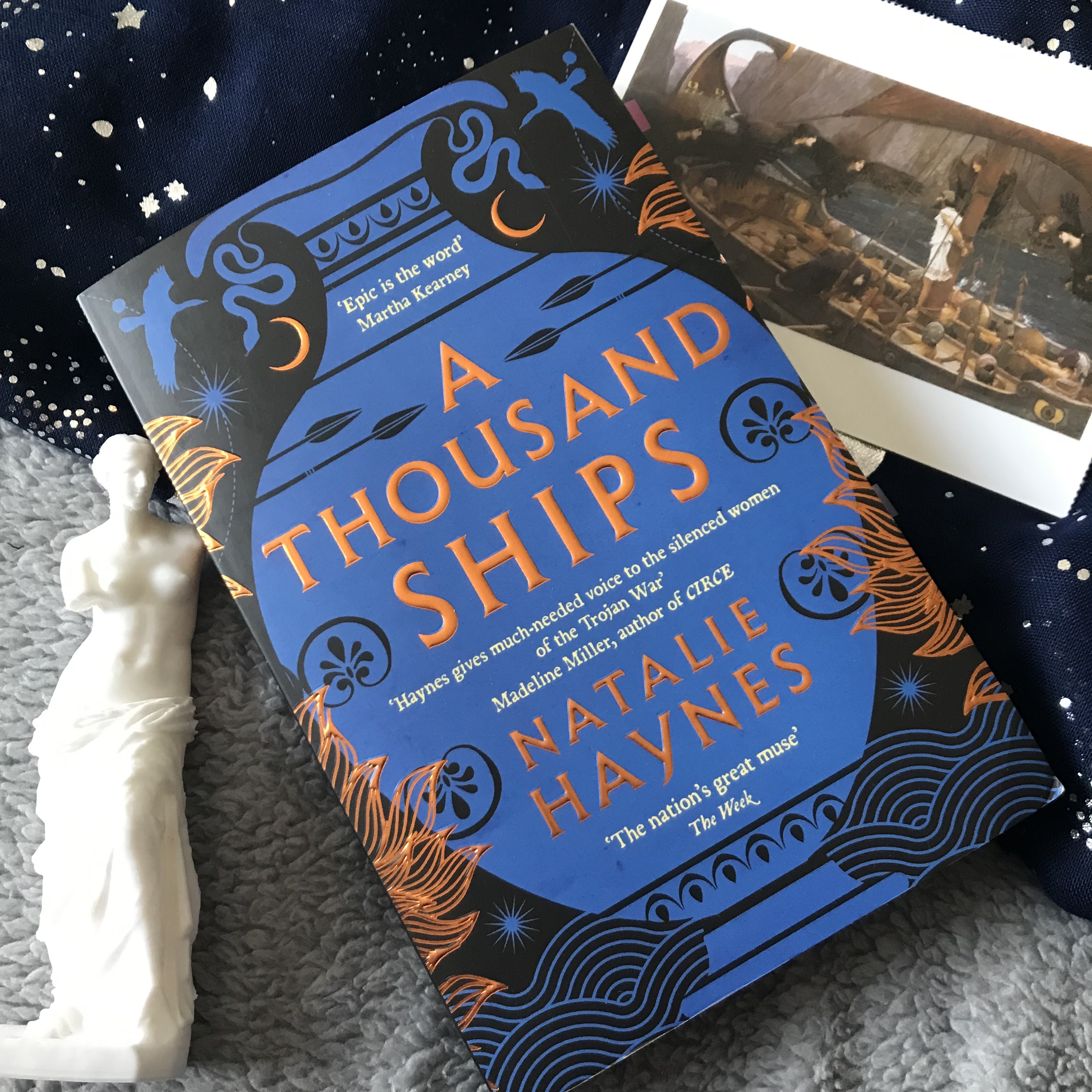 A Thousand Ships by Natalie Haynes

This is the women’s war, just as much as it is the men’s. They have waited long enough for their turn...

In the middle of the night, a woman wakes to find her beloved city engulfed in flames. Ten seemingly endless years of conflict between the Greeks and the Trojans are over. Troy has fallen.

From the Trojan women whose fates now lie in the hands of the Greeks, to the Amazon princess who fought Achilles on their behalf, to Penelope awaiting the return of Odysseus, to the three goddesses whose feud started it all, these are the stories of the women whose lives, loves, and rivalries were forever altered by this long and tragic war.

A woman’s epic, powerfully imbued with new life, A Thousand Ships puts the women, girls and goddesses at the centre of the Western world’s great tale ever told. From The StoryGraph.


Trigger/Content Warnings: This book features vomit, blood, visceral, gorey descriptions, arson, grief, mention of Sudden Infant Death Syndrome, suicide, ableism, rape, and infanticide.
There was a time when several novels about the Trojan War that focused on the women were published around a similar time to each other, and I was intrigued by them all. A Thousand Ships by Natalie Haynes was one of them, and while I found a fascinating and enjoyable read, I was somewhat underwhelmed.

I really liked the set up for A Thousand Ships. What we read is an epic poem written by a poet, who is being inspired by the Muse of Epic Poetry, Calliope. It's not the story he expects or wants to be telling; Calliope has other ideas of the stories he will tell - those of the women involved in or effected by the Trojan War. Those normally relegated to side characters, or not mentioned at all. It's quite amusing, how the unnamed poet gets frustrated, and upset, by what he's writing, but Calliope is determined about the direction this ship will be steered in. I loved this! I loved how Calliope was going to make sure the voices of these women, usually unheard, will come to the forefront of this story.

"But this the women's war, just as much as it is the men's, and the poet will look upon their pain - the pain of the women who have always been relegated to the edges of the story, victims of men, survivors of men, slaves of men - and he will tell it, or he will tell nothing at all. They have waited long enough for their turn." (p176)

I really enjoyed the premise. I loved the chapters with the gods, especially when Aphrodite, Athene, and Hera were arguing over who the Golden Apple belonged to, how vacuous they are, and how that contrasted with the tragedy of the war, the deaths, how it was down to their vanity. And also the larger explanation of why the war needed to be, and how people - gods and goddesses included - are pawns on a mighty chessboard, with much bigger things at play. This story is down to more than a man stealing another man's wife, it's so much bigger than that. It was just clever and intriguing, and thought-provoking. And I really enjoyed Haynes writing.

But I wasn't quite as keen on the structure of the novel. I was expecting A Thousand Ships to start after the fall of Troy, following the women from there. It's rather a collection of the stories of these women - from goddesses to humans, queens to priest's daughters to slaves - than a novel. It jumps back and forth through time - before the war, during the war, the first days after the war, several years after the war - following women we see for only one chapter, to others we return to several times; women who never meet, and women who are together but then separated. It was fascinating and interesting, with so many women I'd never heard of. But there didn't seem to be any proper structure. Most of the chapters could be shuffled about like a pack of cards. The chapters following the Trojan women as a group, and Cassandra and Andromache individually, and the letters Penelope writes to her husband Odysseus - which were brilliant, and so funny, even as my rage grew alongside hers- needed to be in a certain order, because they are the two threads throughout, but all the others could literally be in any order. There's no real flow. And seeing some characters for only a chapter, it's difficult to get too emotionally invested. Horrific things happen in this book, but we don't get to know or care about the characters a great deal before they happen, so it's shocking and awful, bloody terrible, but my heart didn't break. It was the same even with the characters we do see a few times, because we only get to see them a handful of times.

A Thousand Ships is important and powerful in it's way; I tabbed so many quotes, and Haynes has a lot to say about the treatment of women, and these women have very poignant, effecting things to say themselves. But I feel I would have preferred it if it was longer, with more time spent with certain characters, and for there to be more flow, a structure that made sense going from one chapter to the next. Saying that, I did still enjoy A Thousand Ships. I like Haynes ideas and what she does with them, and I'll definitely be checking out her other books following Greek myths. I just hope they'll have more of a narrative structure.